The complementary worlds of tech and beer might seem like an odd pair, but you could say the same about Joel and Jeremy. Starting in 2006 they worked together at a non-profit, Joel as the project manager, Jeremy in content development. Fast forward to 2016, Joel and Jeremy have been working together for nearly a decade. Due to a change in job for Jeremy in 2015, they looked for a project that they could work on together – something they both loved. 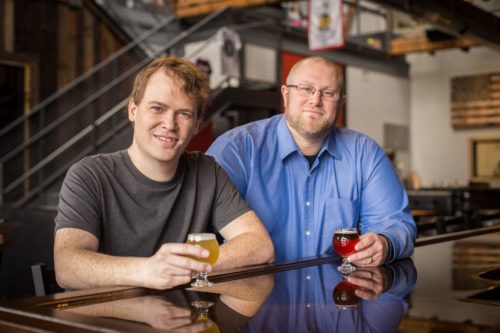 After discovering craft beer in college in the late 1990’s Jeremy has been a passionate advocate for better beer. Whether it is drinking it or making it himself, beer is serious business. Technology is not so much his thing. Joel, on the other hand, has been a tech fanatic since he used his first Apple II. He’s consistently dabbled in and followed news about everything tech, but was not a beer guy. Joel has slowly taught Jeremy passable technology skills and Jeremy has turned Joel into a full-blown beer geek. The ability to partner on something they find so engaging has led to many a late night over beers (in proper glassware of course).

Planning a trip with multiple brewery destinations is a daunting task. In April 2016, they created Chicagos.Beer to make it simple. In July 2016, they rebranded and expanded to include IL & WI listing at BreweryFinder.org. By the time 2019 came around the duo had over 7,800 breweries on the site from each of the 50 U.S. states and all over Canada.

Because these concepts have been at the heart of what Joel and Jeremy do when they have free time, they have both delved into their respective worlds (and dabbled on each other’s turf). Joel has immersed himself in the worlds of WordPress, crowdfunding, and social networks (which is why he gets websites and users). Jeremy is in process of further Cicerone training and brews whenever he gets the chance. Joel brews beer from time to time (and samples a lot of great beer) and Jeremy runs a website (that Joel created).

From a love of beer and tech, they collaborated to create something that fills a gap in the craft beer world. In all that they do, their goal is to enhance the community of craft beer enthusiasts so that more people get to experience great beer and the people who make it. When the craft beer bug bites, you never recover.