First of Its Kind Brewery Directory Launches in Chicago

Chicagos.Beer Opens Beta Website to the Public
First of Its Kind Brewery Directory Launches in Chicago 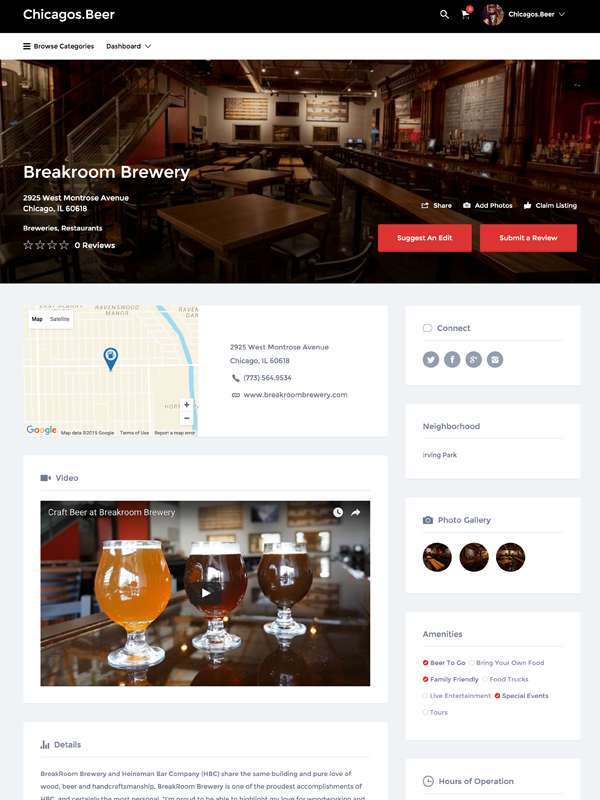 Chicago, IL – Chicagos.Beer announces the launch of its interactive Illinois brewery directory. The first of its kind on the market, Chicagos.Beer solves the frustrations of craft beer fans when trying to easily find established and new local breweries organized in one place. The craft beer industry is exploding in Illinois and now includes nearly 200 distinct breweries. New breweries are opening on a regular basis and Chicagos.Beer is on top of it.

“Companies like Yelp, Google, and Foursquare make brewery lists, but they aren’t useful. Their lists are inaccurate, and miss out on dozens of great new breweries, not to mention what a pain they are to work with for users. There are other beer apps and brewery maps too, but they are incomplete or cumbersome. We think we’ve figured it out with Chicagos.Beer. Finding that next great brewery at the touch of a button has never been so easy.”  – Joel Gratcyk (Co-Founder)

Users can find locations, hours, amenities, photo galleries and much more at the touch of a button from their mobile devices and home computers:

“We came up with the idea of the visual directory out of frustration from spending endless hours pouring over blogs, social media, and websites trying to find out what breweries and beers are in our own backyard. A simple Google map is great, but we wanted something better. Chicagos.Beer distills those many hours of research into a simple location-based interface for our users.” – Jeremy Hylen (Co-Founder)

About Chicagos.Beer: Launched in April 2016, the Chicagos.Beer website is the definitive Chicago area guide to local breweries, brewpubs, taprooms and special events for craft beer lovers. It easily connects every brewery in Illinois to craft beer lovers locally and those visiting the state. Proudly Made in the USA. We drink local.

Photos of our founders, FAQs and more can be found at http://Chicagos.Beer/Press